The coagulation benefits of vitamin K1 (phylloquinone) are well known, however, the other congeners of the vitamin series are not as common (K2, K3, and K4), but equally contribute to a healthy disposition. K1 is abundantly found in leafy greens due to its role in photosynthesis. The absorption of K1 can be enhanced if a fat source like oil or butter is consumed with the greens, owing to the vitamin’s inherent lipophilicity.1 Vitamin K2, or menaquinone’s (MK’s), are identified by their various isoprenoid sidechain lengths (4–13). The MK4 subtype, that is 4 isoprenoid repeating units, can be synthesized through normal gut bacteria, but the other subtypes are primarily produced through non-human gut bacterial modalities. Recently MK4 and MK7 have gained interest due to reports indicating an increase in bone health, dental health, and arterial plasticity as well as a decrease in cardiovascular disease and have been linked to an increase in adipose metabolism.2 Reports have indicated that an increase in MK7 can lead to better glucose homeostasis and offers a protection from the detrimental turnover of lipid and protein structures of the body.2 Unlike K1 and K2, which are naturally abundant, K3 and K4 are synthetically produced and have been successfully utilized in the inhibition of tumor growth while increasing the occurrence of apoptosis of such cells in multiple types of cancers including: leukemia, hepatocellular carcinoma, lung, breast, oral, bladder, bone, and prostate cancers.3 The addition of vitamin C to K3 (menadione) was shown to increase the efficacy of the anti-tumor properties through an increase in oxidative stress in tumor cells leading to cell apoptosis and an arrest of S phase cell division.4 K4 was similarly shown to have an analogous apoptotic pathway as K3 in its anti-cancer activity in prostate cancer cells. In addition to its use in cancer treatments, K4 has been used in the treatment of vitamin K deficiency bleeding (VKDB) in newborns.5

With the growing utility of the K vitamin series of molecules, a need appears relevant for both food labeling of constituents and for research based separation of the natural and synthetic compounds of vitamin K. The fast simple method developed by Hamilton Company using the PRP-C18 5 μm 150 x 4.6 mm column allows for simple efficient identification of the whole vitamin series. The use of the ion-pairing agent, hexylamine acetate (HAA) provided the best separation with the most efficient peak height. HAA offered a good interaction between both the analytes of interest and the lipophilic PRP-C18 resin. To elute the analytes, the stronger chromatographic reversed-phase eluent, tetrahydrofuran (THF) was used. The devised method, though developed with UV detection, is compatible with the standard post column conditions that are typically used with the detection of vitamin K via fluorescence detection. 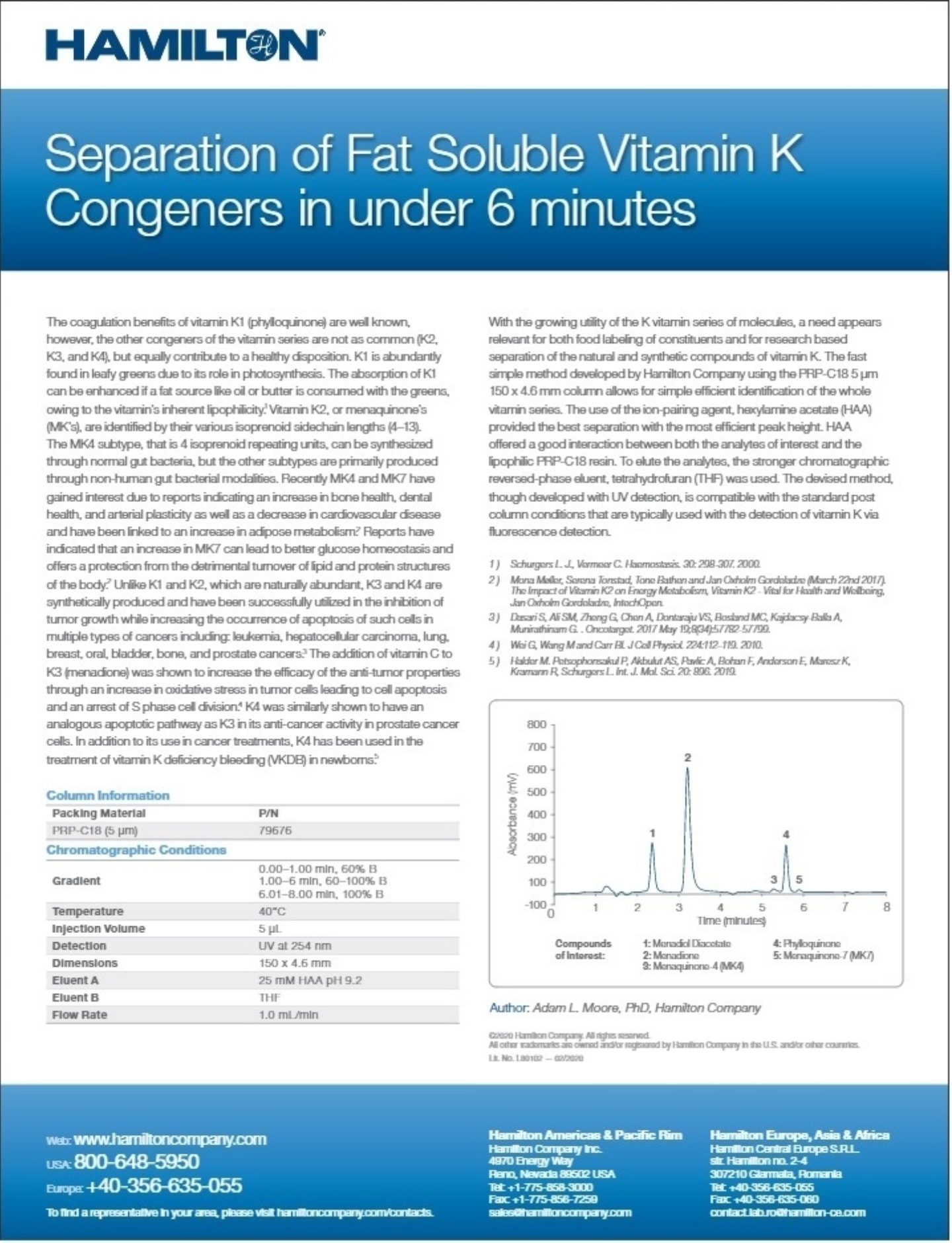