Dyes have been used over the centuries to give food more of an appeal to those eating it. Old foods were sometimes dyed to provide a more palatable appearance. Today food and beverages are generally dyed for the same reasons, to make the product more appealing, satisfying, and occasionally to hide off-flavors arising from the manufacturing process. The food and beverage industry uses synthetic dyes to induce a perception of a fresh and palatable product. However, using the dyes are now up for debate. Consumer concern about synthetic dyes found in food and beverages has risen ~30% in the past five years. Despite the growing evidence that artificial dyes are harming people, the FDA has allowed synthetic dyes' continued use. 1,2 As of now the allowed dyes are Brilliant Blue FCF (FD&C Blue 1), Indigotine (FD&C Blue 2), Sunset Yellow FCF (FD&C Yellow 6), Tartrazine (FD&C Yellow 5), Allura Red AC (FD&C Red 40), Fast Green FCF (FD&C Green 3), and Erythrosine (FD&C Red 3). Though there are dyes from natural products used in the food and beverage industry, they have not garnered the ubiquity of the petroleum-based dyes. As such current studies have shown synthetic dyes to cause allergies, attention deficits, and in some cases lymphoma and other cancers.3-5 Manufacturers use artificial dyes in their food and beverages for several reasons; those include accessibility, cost, and more lasting color.

The common approved and some unapproved dyes are identified with the help of reversed-phase HPLC. Synthetic dyes derived from petroleum products are analyzed in either their neutral state or anionic state. However, the anionic forms are generally not used due to the abundance of free silanols generated from alkaline mobile phases, which leads to poor analyte retention, peak tailing, and low efficiency. Though dyes in their anionic form tend to exhibit poor retention with silica-based columns, the opposite is valid with the Hamilton PRP-C18 column (5 µm).

With no silanol groups to convolute analyte retention, column longevity, and peak efficiency remain. The separation is completed in under 9 minutes and shows all 11 components fully resolved, including all colors of the rainbow; red, blue, yellow, green, and indigo.

The polymeric PS-DVB backbone adds needed stability under the alkaline pH of 9.2, which is required to resolve two integral components, brilliant blue, and fast green. Additionally, the use of ammonium acetate as a mobile phase buffer allows the method to utilize a Mass Spectroscopy detector for increased analyte sensitivity. 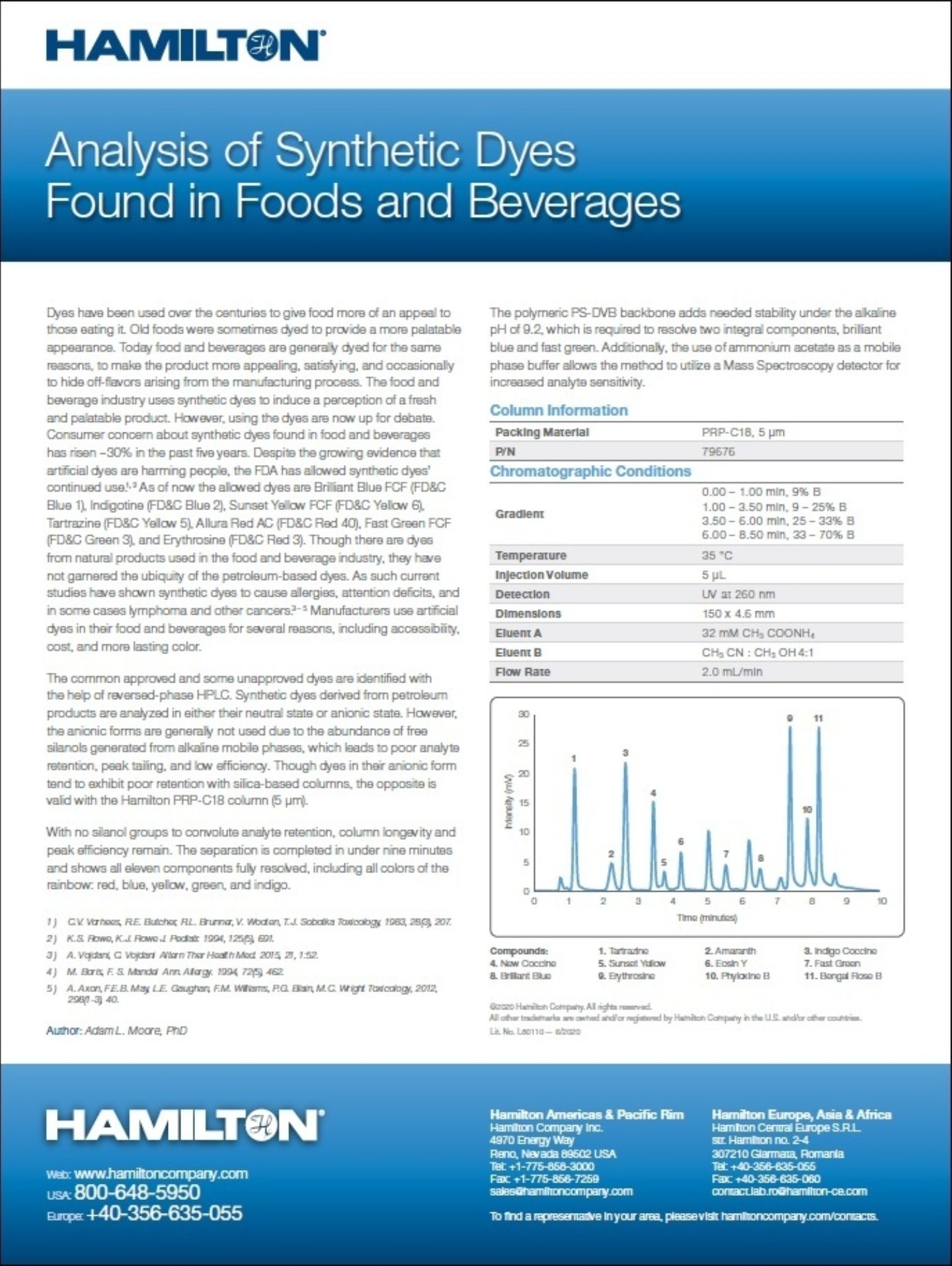