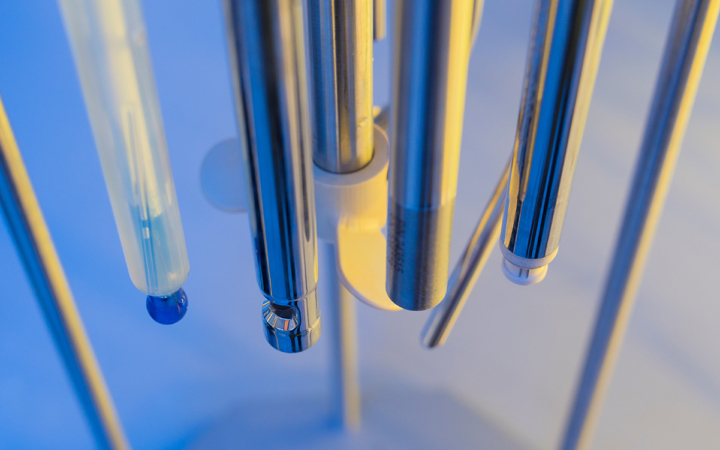 A Critical Process Parameter (CPP) is a term used in pharmaceutical production for process variables which have an impact on a critical quality attribute (CQA) and, therefore, should be monitored or controlled to ensure the drug product obtains the desired quality. Physical and chemical CPPs are commonly monitored using in-line/on-line process sensors or at-line process analyzers.

CPPs are essential as process engineers optimize the entire process by which raw materials are converted to desired outputs. Often this involves defining a design space and leveraging design of experiments (DoE) studies. The goal is process validation that ensures the safety and efficacy of the pharmaceutical products.

Measuring quality parameters in manufacturing and production starts with monitoring of several common process parameters. Common CPPs in a bioreactor include:

The most classical example of PAT applied to bioprocesses is the maintaining of culture pH at a pre-defined set-point based on an in-situ electrochemical sensor signal. The signal is used to automatically regulate the addition of a base or acid (or the controls of CO2 for mammalian cells). The working range varies according to the application. For example, mammalian cells vary between 6.8-7.4 pH, while others, like insect cells, are optimized around 6.3 pH. Tight control of this parameter is crucial. Drifting pH measurement often negatively influences the product’s yield in large scale manufacturing operations. Keeping the pH in the correct working range has an impact both on cell viability as well as on the product’s quality. An example of the latter is how pH directly affects the therapeutic effect of mAbs, where too low of a pH level negatively influences the protein’s glycosylation pattern. Glycosylation is one of the most important CQAs for monoclonal antibody production, and improper pH can result in a loss of bioactivity in the final product.

The most common process pH sensors are electrochemical combination glass electrodes which are designed to withstand multiple autoclavations, CIP, and SIP cycles. Alternative pH measurement solutions, such as optical sensors, exist as well; however they have limited measurement range, can only be sterilized by gamma radiation, and exhibit substantial drift making it difficult to guarantee accurate measurement.

Dissolved oxygen (DO or pO2) is another critical process parameter. Air or oxygen-enriched air is supplied to the bioreactor to support cell demand. Oxygen is used for cellular respiration and cellular growth. While important, DO can be controlled over a broader range than pH without too significantly impacting cell growth rates or product quality. Typical DO operating ranges for aerobic cultures lie between 30 to 40% air saturation. DO levels below this range will affect cell viability, whereas excessive DO levels can oxidize the end-product.

Two types of bioprocess DO sensors are commonly used: polarographic and optical. Polarographic sensors utilize an electrochemical cell (sometimes referred to as a Clark cell). This design was the first to market, and has limitations of high maintenance costs, extended startup time, and measurement errors due to fouling by CO2 and other gases. Optical DO sensors based on the newer quenched luminescent technology have begun to supplant polarographic technology and are now considered state-of-the-art for in-situ measurement.

Dissolved CCO₂ (DCCO₂ or pCO₂) is a parameter which is monitored due to its influence on pH values in mammalian cells and fatty acid synthesis. A higher dissolved carbon dioxide level can inhibit cell growth and reduce production of secondary metabolites. Carbon dioxide is especially critical in cell culture (mammalian) processes and must be kept within 5 - 10% air saturation. It has also been shown that optimized DCO₂ profiles can substantially increase productivity when controlled in real time. Process DCO2 sensors based on electrochemical principles have been available for many years. They are affected by high maintenance costs to ensure an acceptable measurement accuracy.

In some bioprocesses, like those using yeast for antibiotics production, culture viability is controlled by monitoring indirect indicators like Oxygen Uptake Rate (OUR) and Carbon Dioxide Evolution Rate (CER). The ratio between O2 and CO2 entering the bioreactor and the exhaust/off-gas measured after the air filter is used as a proxy of culture viability. Exhaust/off-gas can be measured with at-line mass spectrometers or with on-line process sensors based on galvanic measurement and infrared (IR) absorption. These measurements are mainly implemented for microbial culture, where the measurement is considered complicated and often not sufficiently reliable.

Proper monitoring of nutrient (or substrates) concentration, as well as measurement of secondary metabolites, is important, especially for fed-batch and perfusion processes, as the feeding strategies can be controlled during the process. Glucose or glycerol are the main C-source (carbon source), while glutamine is the main N-source (nitrogen source), together with other amino acids in these bioprocesses. During the fermentation they are consumed, and secondary metabolites such as lactate, acetate and ammonium are produced. Suboptimal feeding strategies can produce excessive secondary metabolites which hinder cell viability and product yield. For example, the accumulation of lactate in mammalian cultures has long been recognized as an inhibitory factor for cell growth and recombinant protein production. Therefore, control of nutrient feeding is of paramount importance (along with pH, DO, and temperature), for process optimization.

In-line and on-line sensors are typically based on molecular spectroscopy technologies like Near-Infrared (NIR) and Raman. They are secondary measurement technologies, meaning measurement with off-line reference methods are required to calibrate them through use of statistical Multivariate Data Analysis (MVDA). The measurement accuracy of these methods is strictly related to the specific bioprocess environment and to the quality of the off-line measurements used for calibration. There have been no published studies which show the use of the same global MVDA calibrations to predict different cell processes with an acceptable accuracy. For all such reasons, they are considered too labor-intensive and too expensive for a successful implementation in production environments.

The complexity of these measurements elucidate why at-line and/or off-line methods are still the most common option for nutrient and metabolite monitoring, despite not being optimal for PAT compliance. This equipment may utilize different technologies such as HPLC, glucose oxidase, or other biochemical analysis to perform the measurement. These analyzers can be automated or semi-automated. They often require separate devices for sterile sampling and measurement cycles often require a relatively long measurement time (minutes). Yet, for the reason explained, they remain the only option available for measuring the culture’s substrate and secondary metabolites.

Temperature is a fundamental and well-controlled parameter in bioprocesses. Bioprocesses are typically monitored and controlled tightly between 0 and 60°C, including during sterilization cycles in many cases. Several devices and measuring principles are common to measure temperature in bioreactors such as thermistors, resistance and bimetallic thermometers.

Other physical and chemical CPPs, such as pressure and ORP can be controlled to optimize the cultures fermentation processes, as well. Pressure is an important control parameter because it affects not only the bioprocess but also safety. In general, it influences the saturation concentration of the gases dissolved in the liquid phase, like DO and DCO2. Most common measuring options are represented by piezoelectric-based and filled diaphragm transducers.

Monitoring the oxidation reduction potential (ORP) provides information regarding the concentration of oxidizing or reducing molecules. ORP can provide important feedback for understanding the process and optimizing the yield from mammalian cells. Similar to pH sensors, the most common in-situ monitoring option is a combination reference/measurement electrode.