The primary nucleosides encompass a broad array of biological functions associated with RNA, particularly after configuration into multidimensional conformations. Nevertheless, researchers have found over 100 natural modifications to the native nucleosides that have led to a sea change in RNA design and discovery. These novel nucleosides provide increased chemical and thermal stability. Additionally, the nucleosides’ adaptations help to mediate various RNA functions within the cell. In addition to the natural modifications, a wide variety of non-natural nucleosides can be incorporated into RNA by natural or synthetic routes. These modifications often provide RNA with distinctive properties, such as expanded or altered hydrogen-bonding via van der Waals, base-stacking, or electrostatic interactions. Or by incorporating unique metal-binding sites, chemical reactivity, or fluorescent characteristics.1

One of the more exciting applications with modified nucleosides is in the realm of disease markers, most notably, metastatic tumors and some viral infections.2 Modified nucleosides are primarily observed in both messenger (mRNA) and transfer RNA (tRNA). When mechanical or chemical stresses occur, catabolism of RNA material leads to inflammation and hypoxia.3 The removal of the non-essential components is facilitated through urine excretion and produces an increase in the concentration of pseudouridine, 1-methyladenosine, 7-methylguanosine, 2’-O-methylcytidine, and 1-methylinosine to name a few.4 The level of each metabolite reflects the quantity of RNA degradation in the organism.5 Moreover, urinary excretion of methylated nucleosides, resulting from increased turnover and degradation of RNA, especially from tRNA, is excreted in statistically increased amounts in the urine of patients with different types of malignant tumors and/or HIV.5

Hamilton’s PRP-1 (5 μm) reversed-phase HPLC column demonstrated enhanced resolution of 12 common modified and non-modified nucleosides. The polymeric particle found in nearly all of Hamilton Company’s columns exhibit decreased pump pressure while still achieving the separation of that of small particle sorbents. Ammonium formate was used as the mobile phase eluent and allowed for satisfactory resolution of all the analytes. Similarly, using a more volatile mobile phase like ammonium formate allows for analysis with mass spectroscopy detectors if so desired by the analyst. The use of isocratic methodology enabled the suitable separation of the first nine nucleosides. The last three compounds eluted with a slight gradient of acetonitrile to facilitate better peak shape for the more lipophilic nucleosides. 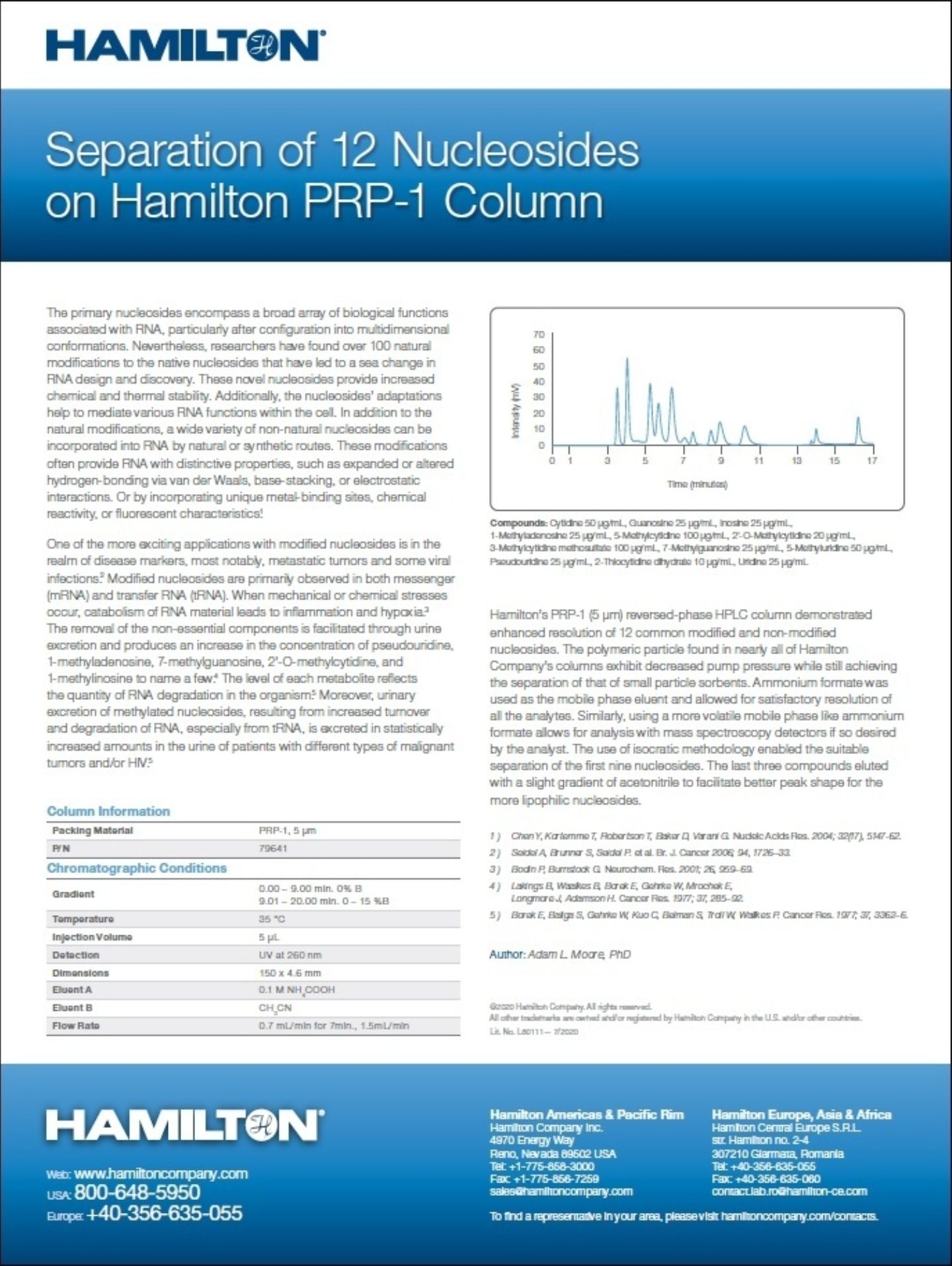