Identification of polymeric hardening agents has led to unforeseen effects on humanity. Plastic containers have minimal initial costs and can conform to any shape desired compared with other types of modalities. To help ensure the container can hold its shape as well as aid in corrosion protection from acid components, amphiphilic compounds are added. However, since chemicals are added to the polymer to tune the hardness, pliability, longevity, and any other plasticity metric, there is a possibility of leaching under the right conditions. These conditions include increased solvent temperature, lipophilic and amphiphilic samples, and extended exposure to ultraviolet radiation.

One known side effect of the use of bisphenolic hardeners has been found in their role in endocrine disruption in the reproduction cycles of animals and humans. Bisphenol A (BPA), which has a phenol connected to another phenol through a dimethyl methylene bridge para to the phenolic alcohols, has achieved most of the attention by the FDA and is specifically documented to produce endocrine disruption. As stated by the FDA, oral exposure should not exceed 5 mg/kg body weight/day for adults.1 Disruption of both male and female reproduction has been linked to BPA consumption due to its properties as a weak estrogenic agent.2 Similarly, other bisphenolic plasticizers have shown some early evidence as estrogenic mimics.3

Multiple studies examining BPA toxicity on human health and environmental detriment have been ongoing over the past decade. However, studies of alternative bisphenols used in polycarbonate (PC) bottles have not been exhaustive. Industrial plastics producers that use BPA were compelled to change in light of the unintended side effects. However, the bisphenols exchanged for BPA, now ubiquitous in the plastic community, are similarly detrimental. Initial studies indicate bisphenol variants cause equivalent health and environmental consequences but are not universally known to the public.4 Some bisphenolic derivatives used include; S, F, M, or Z (BPS, BPF, BPM, BPZ). Leaching attributes of bisphenolic derivatives exhibit similar results as BPA when exposed to elevated temperature, UV radiation, and oil based conditions.5

One study applied typical leaching studies, generally performed with BPA, to bisphenol derivatives. BPZ concentrations from those studies, attained from a leachate solution of hot water or a 50% ethanol solution, were in the range of 1.1–4.6 ng/L, quantities similar to that of BPA.6

We have set out to determine whether BPA Free bottles are truly BPA free.

1. How many BPA or similar derivatives are in the sample?

2. If there is BPA or BPA derivatives in the sample, can a bottle be purged of the residue?

3. Does purging of the leached material effect the structural integrity of the bottle?

With these questions in mind we made a base set of experiments to be performed on a Shimadzu 20A HPLC instrument with UV detection. The study was completed using a 50 x 7.8 mm column from Hamilton Company featuring a 5 μm PRP-1 particle with guard column to achieve fast separation for identification of bisphenol compounds (Bisphenol A, Z, F, M, and S). The eluents used were acetonitrile and distilled water.

Samples were prepared through the addition of water at either 25, 35, 50, or 70°C or a varying percentage of ethanol (5, 20, or 40) at a sample size of 200 mL to a 1 L BPA Free plastic water bottle. The extraction solution was added, shaken vigorously for 2 minutes, and then allowed to rest for 30 minutes. The sample was then poured into a glass beaker where a 20 mL aliquot was removed and concentrated via an SPE cartridge (eluted with 1:1, acetonitrile:water). Method validation was achieved by following the same procedure described above using a 1 mg/mL spike solution dissolved in a 200 mL extraction solution added to the water bottle at 25°C. Initial spike recoveries were calculated at +/-95 -105% of initial spike concentrations.

The experimental results from the initial bisphenol leaching test from new BPA Free PC water bottles were analyzed using HPLC detection. Extractions containing water at 25, 35, 50, and 70°C are based on possible seasonal temperature fluctuations found inside a car. No leaching of bisphenolic derivatives was observed after extraction at 25°C in seven new PC plastic bottles. The extraction results (Table 1) indicate a linear correlation between extraction temperature and bisphenol concentration. This relationship indicates the degree of lability of the bisphenolic analytes from the polymeric web containing the plasticizer.

Confirmation of BPA Free bottles containing BPA derivatives led to the question: Can hot water rinses eliminate BPA derivative leaching? To test this theory, the bottles were repeatedly exposed to 70°C water in 30 minute intervals until the extracted bisphenol concentration fell below the detection limit.

The results shown in Table 2 indicate that after 4 repeated exposures of 70°C water for 30 minutes, the bisphenol concentration would be below the detection limit. This result indicates that one could repeatedly expose their reusable bottle to near boiling water and potentially purge the bottle of leachable bisphenol. Crude analysis of the bottle did not indicate any structural damage to the PC bottle.

Investigation of leachates with ethanol is of interest due to the popularity of alcoholic beverages around the world. Furthermore, it is common for people to fill their water bottles with various types of alcoholic beverages when drinking away from home. With the added risk of broken glass omnipresent, most outdoor facilities prohibit glass containers, thereby promoting plastic beverage holders. The three most common ethanol percentages on the market were analyzed, 5, 20, and 40%; found in beer, wine, and distilled alcohols like whiskey or vodka. The extraction temperature of 25°C was chosen due to the increased solubility of bisphenol in ethanol.

Analysis of the data presented in Table 2 indicates a linear dependence of extracted bisphenol concentration versus increasing percentage of ethanol from new PC bottles. These results do not come as a surprise since the solubility of bisphenolic derivatives is higher in amphiphilic solvents than in an aqueous environment. Comparison of the two trends, hot water versus ethanol, indicated that the two data sets provide similar linear relationships, but with a larger bisphenol concentration extracted using the ethanol than the hot water. The results from Table 3, suggest that repeated exposure to 40% ethanol provides a stepwise decrease in the quantity of bisphenol leachate per interval. Analysis showed that five washes of 40% ethanol did remove bisphenolic residues to a non-detectable level in this study and retain the structural integrity of the bottle, Figure 3.

Finally, a PC bottle completely leached by successive 70°C water was extracted with 40% ethanol solution. The ethanol extraction provided an additional 1.27 ±0.05 μg of bisphenolic derivatives out of the purged bottle. Conversely, attempting to extract more bisphenol out with hot water after depletion with ethanol yielded (<0.01 ±0.05 μg) no more bisphenol in our 30 minute time exposure.

The results from this study indicate a fast and easy way to identify bisphenolic compounds through the use of liquid chromatography. The mini study indicates that new water bottles containing BPA Free labeling, still contain bisphenol derivatives that can leach under exposure to alcohol or water at a temperature above ambient. To eliminate the threat of leaching toxic bisphenol, water must be kept at or below 25°C. Additionally, removal of leachable bisphenols from new polycarbonate bottles was achieved through the washing of the bottle with five repeated exposures of 40% ethanol. This produced satisfactory results that gave values below the detection limit (0.05 μg) of this study while appearing to maintain the structural integrity of the container. 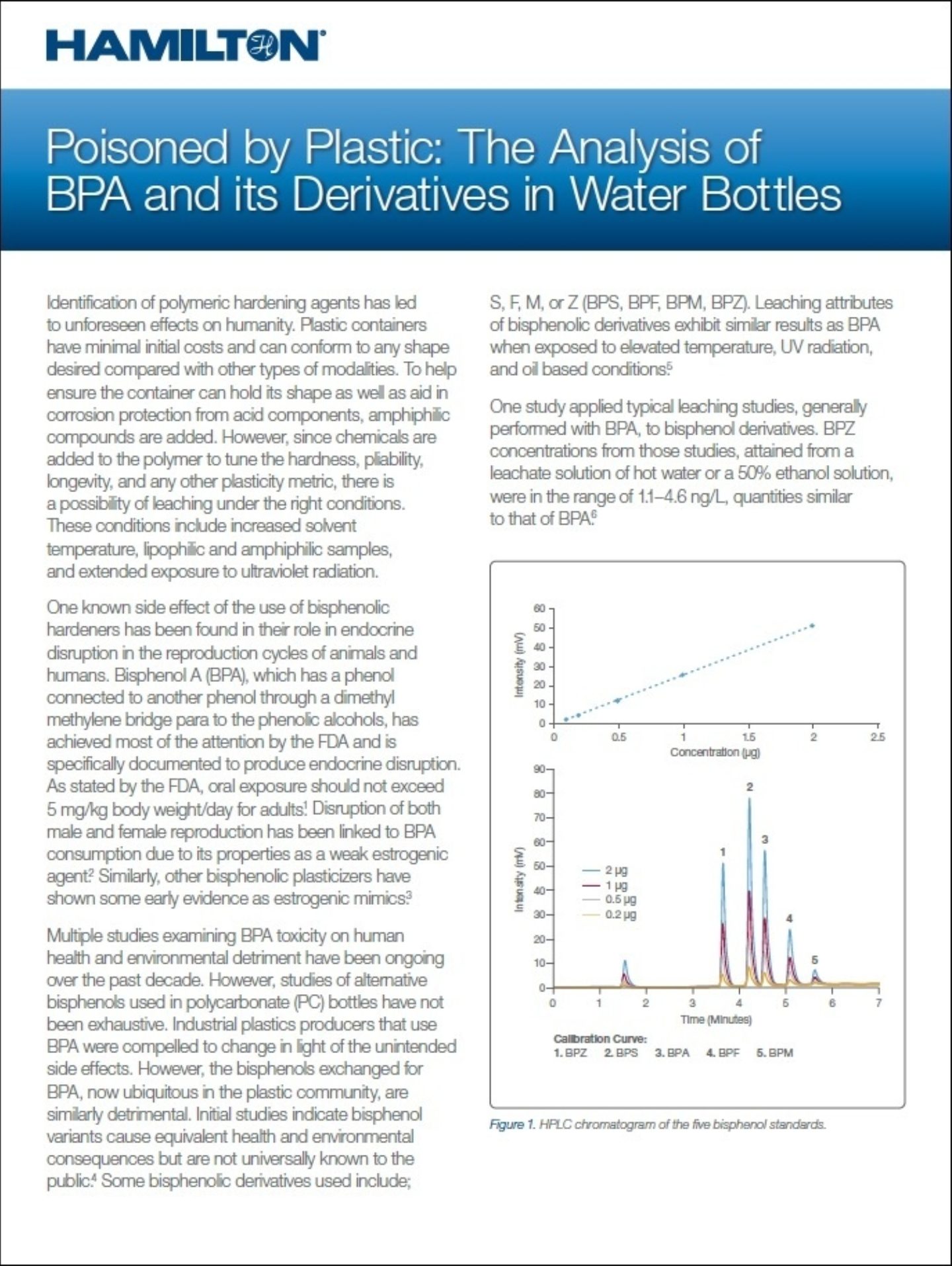