Reversed phase (RP) silica is still the most frequently used HPLC stationary phase despite some well-known limitations, such as pH and temperature stability, peak tailing or sensitivity for hydrolysis. Polymer-based resins on the contrary are not prone to these limitations and offer a good alternative for low and high pH applications. In this study the performance of Hamilton PRP-1 polystyrene-divinylbenzene RP-column has been compared to two C18 silica stationary phases for the separation of sibutramine, an antiobesity drug, using paroxetine as an internal standard.

In HPLC-applications a proper quantification of the separated compounds is essential. In addition, the number of com-pounds which have to be analyzed and purified increases from year to year. About 80-90 % of the used reversed phase columns are based on C8- or C18-modified silica support. Despite the traditional high distribution of RP silica columns there are still limitations of this material, such as peak tailing due to e.g. surface silanol residues and metal contamination of silica raw materials [1-2], hydrolysis of the silica backbone and strip off of C8/C18 due to low and high pH conditions or increased temperature [3-4]. The most consistent way to avoid the limitations of currently used RP silica is the transition to polymeric HPLC supports. Polymeric material is inert against hydrolysis [4] and contains no polar silanol groups. As a consequence very symmetric peaks can be achieved. The column lifetime is highly increased and irreversibly adsorbed contaminations may be removed under harsh conditions. Due to the high degree of cross-linking the columns are stable up to a pressure of 5,000 psi and can be used from 0 up to 100n% organic solvent without negative swelling effects.This study [5] aimed to establish an efficient standard method for the analysis of sibutramine (SIB), an anti-obesity drug using the antidepressant paroxetine (PRX) as internal standard and for simulation of a two-component system. Both drugs were separated on a Hamilton PRP-1 polymeric reversed phase column and different reversed phase C18-silica columns.

SIB was extracted from Meridia 15 mg capsules, Abbott (Syria). The capsules were broken and suspended in 100 mL of high purity water. After mixing and centrifugation at 18,000xg the supernatant was filtered through a 0.45 μm filter. After filtration and dilution, PRX was added as an internal standard in a final concentration of 10 g/mL.

PRX at 98.0 % purity was obtained from Nobel Ilac, AS (Turkey) and water was purified with Milli-Q Synthesis A10 system, Millipore, SAS (France).

The separation on the polymeric PRP-1column (Figure 1 A.) delivers more symmetrical peaks compared to the C18’s, as verified by the low SIB asymmetry and tailing factors of 0.99 and 0.96 which are below 1 (Table 1) due to a slightly peak fronting. On the contrary, the chromatograms from both C18 silica separations (Figure 1 B. and C.) show pronounced peak tailing. The traditionally endcapped silica yields the highest tailing and asymmetry factors of 2.05 and 2.38 while the polar endcapped material performs slightly better (Af=1.42 and T=1.9 8). Peak tailing leads to improper separation of highly related compounds and makes quantification difficult. For unknown samples the reason for the peak tailing is often hard to identify. Possible reasons for peak tailing are: Secondary interactions, non-linear adsorption/desorption isotherms, interactions with silanol-residues or a second compound which is co-eluting. Baseline separation of SIB and PRX under isocratic conditions has been obtained with all three columns. The longer retention times on the C18-silica columns may be further shortened by gradient elution.

It was shown that the polymer-based PRP-1 column could be a good alternative to commonly used silica-based columns for, e.g. drug components, such as SIB or PRX. The difference in retention was high enough to fully separate both components without pronounced tailing as it was partially observed for both C18-silica columns. Especially if a separation has to be per-formed under demanding conditions the additional features of PRP 1, such as high pH- and solvent compatibility, pronounced temperature resistance and good long-term stability could be important benefits. 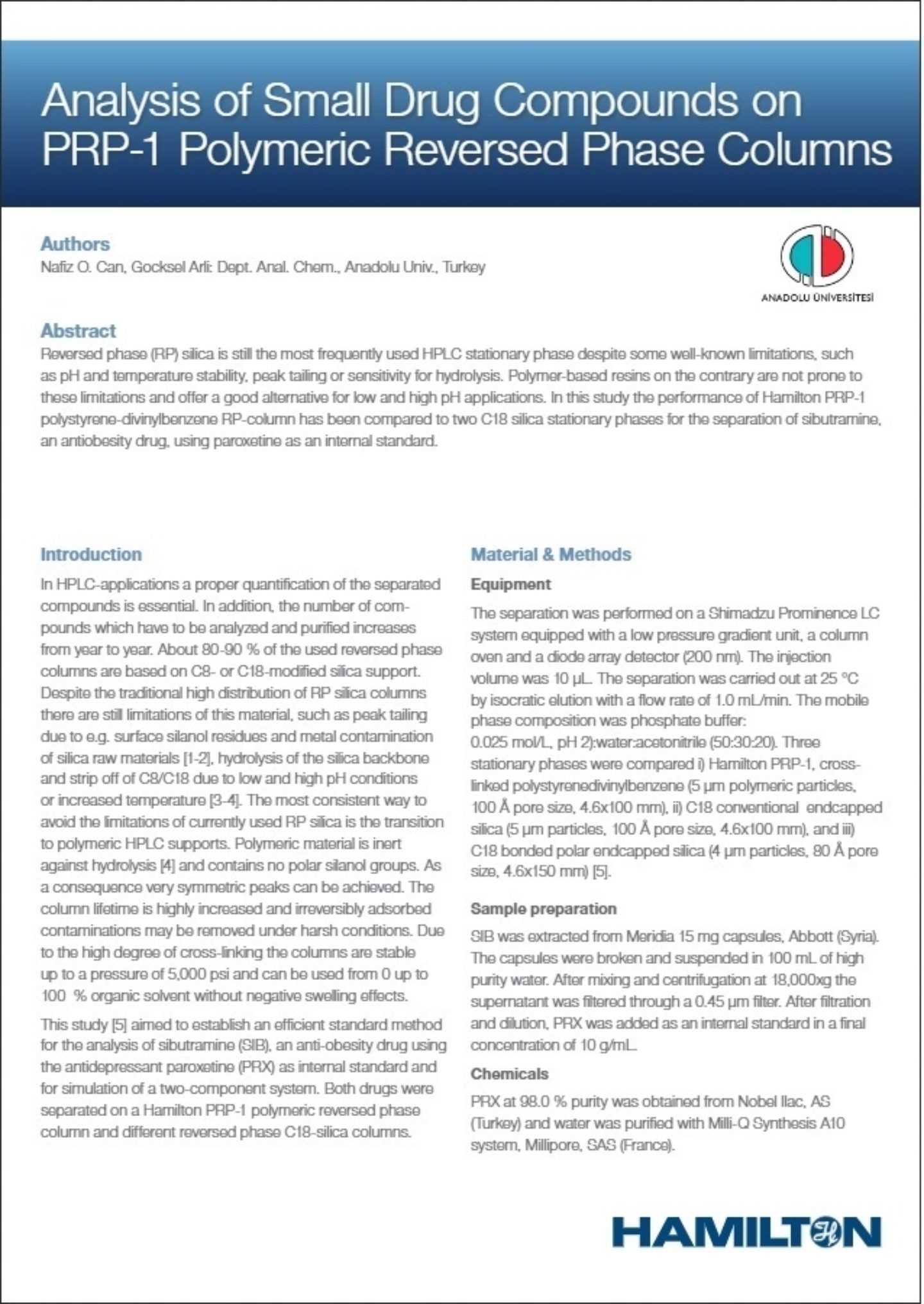