Oligonucleotide based treatments have made rapid advancements in a number of different molecular biology fields. In recent years, the number of oligonucleotide therapies going through clinical trials has risen dramatically. New therapies attempting to make it to market include Short Interfering RNA (siRNA), Antisense Oligonucleotides (ASO), microRNA (mRNA), and some aptamers.1 New advances and patents in the field of oligonucleotide synthesis have made the purification and yields of the target molecules better, however, there is still a demand for a more efficient purification of final products in order to meet the rigorous demands set forth by the FDA (total impurity < 0.05%).2

Purification of Oligonucleotides from their synthesis products, failure sequences, protecting groups, and other starting materials, can be accomplished by a few pathways. The first method is Polyacrylamide Gel Electrophoresis (PAGE) which uses an electrical charge to separate compounds via chain length. This method provides highly pure products, but is preferred only for oligonucleotides of 100 base pairs or larger due to its decreased yields and time intensity.3

A secondary route for purification is through the use of ion-exchange chromatography. This method separates oligonucleotides based on their charge. The length of the oligo determines the charge, the longer the length the larger the charge. Separation is achieved by the use of a low affinity salt concentration initially, followed by a gradual increase in a higher affinity salt, (mobile phase B) until the salt displaces the oligonucleotide. This method provides good resolution between the full length product and the N-1 failure sequences. Failure sequences generally consist of the desired length of sequence minus one nucleotide generally found missing from the end of the sequence, but could be from anywhere along the synthesis. Ion-exchange is primarily used in the 40–100 base pair region and with oligonucleotides that contain a high degree of secondary structure, i.e. hairpin loops which add complications to chromatographic separations. Ion-exchange chromatography is preferred for these types of compounds because the chromatographic resins are typically made from polymer particles that are capable of tolerating highly alkaline conditions (pH > 12) without degradation. The alkaline pH helps to reduce secondary structures associated with target oligonucleotides that contain broad peaks or multiple peaks with the use of lower temperatures or more neutral pH’s. Down sides include; long equilibration times of initial salt gradients, i.e. ~200 column volumes, high salt content upon collection of the final product, and completion of an extra purifying step, de-salting.

The use of RPIP chromatography does have some drawbacks. Separation of the desired product from the N-1 failure sequence can be difficult when the length of the oligonucleotide sequence is > 20 base pairs. Additionally, secondary structures, produced by the interaction of complimentary base pairs with its own strand or with neighboring strands, (duplexes, hairpin loops, and guanine quartets) can make separation difficult. Temporarily alleviation of secondary structure can be accomplished in two common ways. The first is through the use of elevated temperature in the column oven, > 60 °C. The second is through the use of a highly alkaline mobile phase, generally, pH > 12. Unfortunately, most RP media is silica based and degrades under alkaline conditions. However, RPIP does have its benefits; minimal desalting, increased speed due to less equilibration, facile mobile phase synthesis, and Mass Spectroscopy compatible mobile phases which allow for more efficient characterization of the desired product. However, to accomplish the desired purity, any or all of the aforementioned tools may be necessary for optimal purity.

To combat these potential challenges, the Hamilton PRP-C18 (5 μm) HPLC column was used for purification of three oligonucleotides. Analysis of a 21mer, 22mer, and 23mer of similar structure was evaluated for the ability to separate the N-2 and N-1 from the full length product. A benefit of using this column is the highly stable PS-DVB backbone. The resin is temperature resistant to 100 °C and pH stable up to 13. The C(18) moiety is chemically bonded to the PS-DVB backbone which allows for better retention with some oligonucleotides, than just the PS-DVB base structure by itself. In this study we have chosen to look at the selectivity of various lengths of amine based IP agents as well as increasing steric interaction associated with the alkyl amines.

The aqueous eluents investigated included; 100 mM Triethylamine acetate (TEAA), tetrabutylammonium phosphate (TBAP) 1 mM mixed with 10 mM tetrabutylammonium acetate (TBAA), TBAA 100 mM, and hexylamine acetate, (HAA) 100 mM. In order to examine the behavior of each type of IP agent, the same concentration was used. One exception was with TBAP/TBAA in which a conscious effort was made to see the lowest concentration of IP agent needed to separate out N-2, N-1, and the full length product. Examination of the different eluents using identical conditions showed an increase in peak efficiency with an increase in alkyl chain length on the amine. The observed order of peak efficiency was HAA > TBAA > TBAP/TBAA > TEAA. A switch from primary amine to the more sterically hindered quaternary amine showed a decrease in peak efficiency and an increase in retention time. This phenomenon can be attributed a steric and electronic effect associated with the butyl groups. The butyl groups can interact more strongly with the C(18) moieties on the stationary phase in addition to the increased charge stability associated with a quaternary amine versus a primary amine. Table 1 indicates that a change in the IP agent can dramatically affect the lipophilicity of the analyte with the stationary phase. Similarly, the concentration needed is ten times less when using a quaternary amine to affect the same increase in lipophilicity.

Elution strength for the organic mobile phase was shown to follow the typical order of MeCN > EtOH > MeOH. Analysis of the K* values and plate efficiency are shown in Table 2 for the aforementioned sequence with TEAA as the aqueous mobile phase. Table 2 shows that when the eluents are compared, there is only a slight increase in the organic percentage 20% to 21% to 25% under identical conditions.

After completing the initial separation of the oligo in question, sample loading was investigated. One benefit of using the unique Hamilton polymer columns is the high loading capacity. In this application, Hamilton’s 2.1 x 50 mm PRP-C18 (5 μm) column can accommodate up to 3 mg of crude product before any peak distortion is observed. Additionally, up to 6.7 mg can be loaded before the peak starts to show major breakthrough in the chromatogram. Scale up into larger diameter columns is easily calculated, and linearly scaled.

The effects of increasing particle size was also investigated with the use of TEAA/CH3CN mobile phase. When particle size increases, an inverse effect happens to the peak efficiency. As shown in Table 4, particle size is increased and resolution between N-1 and N-2 from the desired full length product is decreased minimally. Scale up is easily accomplished by increasing particle size from the standard 5 μm to the 12–20 μm particle with minimal change in retention time, effectively eliminating back pressure and increasing speed while still maintaining efficiency for the preparatory collection of product for use in therapeutic avenues.

Conclusions
The Hamilton PRP C18 (5 μm) HPLC column performs well under various mobile phase eluents. Similarly, multiple aqueous mobile phases were shown to predictably shift the product and failure sequence peaks to higher lipophilic retention with increased alkyl number and increased functionalities. Likewise, changing the organic mobile phases shifted the product peaks to less lipophilicity when stronger RP eluents were used. Each mobile phase eluent had its upside and allowed for separation of N-2 and N-1 from the desired full length product. The column gave good separation with various gradient profiles and under various particle sizes. The excellent loading capacity of the column make this stationary phase desirable. Larger particle size was not a deterrent for effective separation of the failure sequences when using TEAA as a mobile phase. Finally, the high temperature range available allowed continuous analysis of the crude mixture of oligonucleotides. 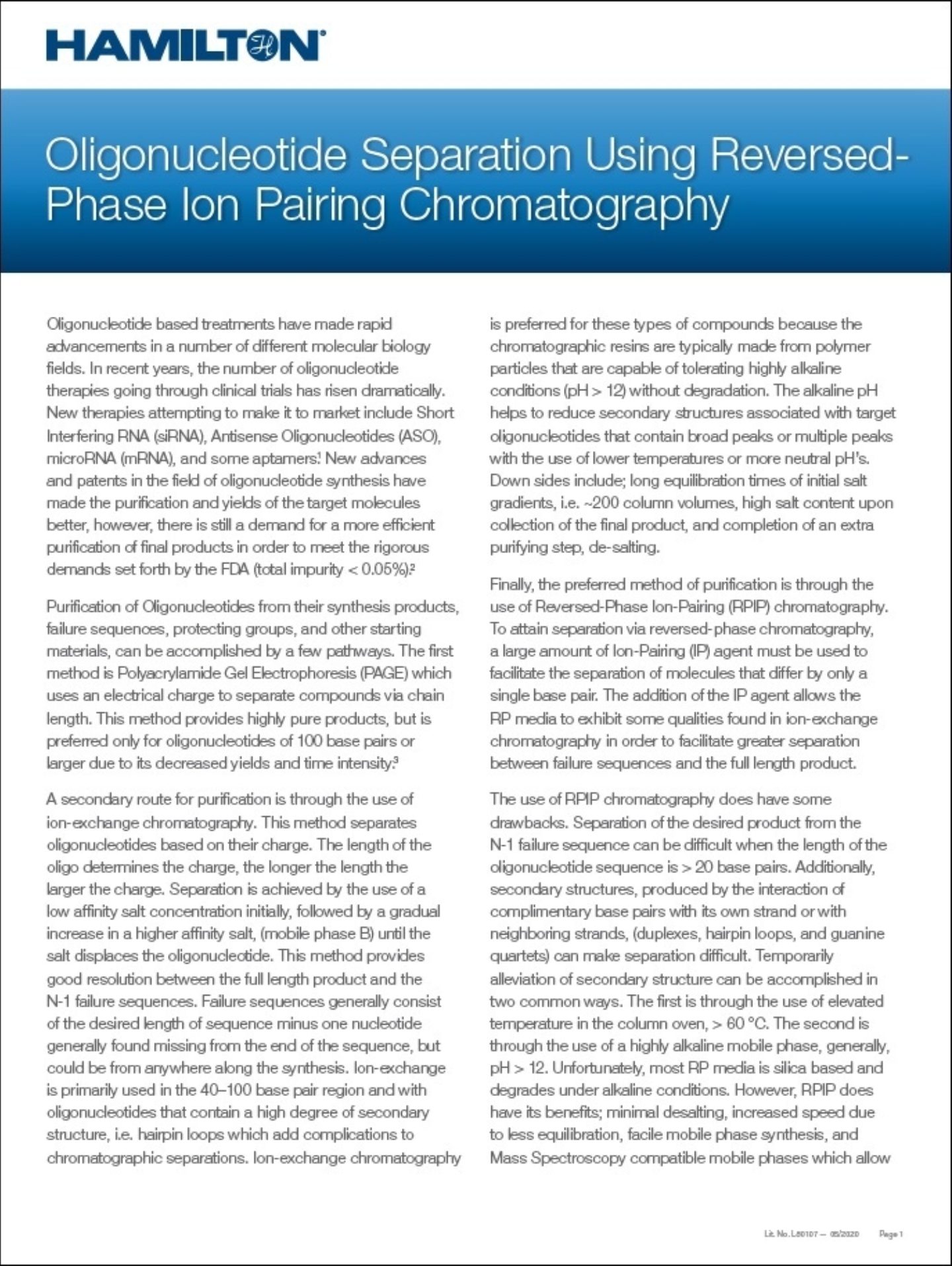